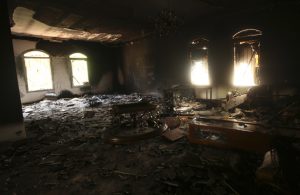 An interior view of the U.S. consulate, which was attacked and set on fire by gunmen yesterday, in Benghazi September 12, 2012. Christopher Stevens, the U.S. ambassador to Libya, and three embassy staff were killed as they rushed away from the consulate building, stormed by al Qaeda-linked gunmen blaming America for a film that they said insulted the Prophet Mohammad. Stevens was trying to leave the consulate building for a safer location as part of an evacuation when gunmen launched an intense attack, apparently forcing security personnel to withdraw. REUTERS/Esam Al-Fetori (LIBYA – Tags: POLITICS CIVIL UNREST)